A Cool Jam to Make You Feel Good

Pick Up The Pieces is played a little way in. 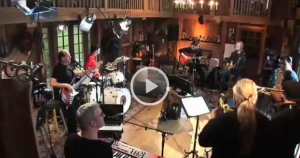 Daryl Hall started Live From Daryl’s House, the free monthly web show in late 2007, after having the idea of “playing with my friends and putting it up on the Internet,” and the show has since garnered acclaim from Rolling Stone, SPIN, Daily Variety, CNN, BBC, Yahoo!  Find Out More and Hear More