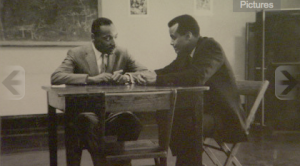 about Obama
about where we are

A Documentary about Harry Belafonte’s life premiered at SUNDANCE this week.

about Sing Your Song
new documentary about his life

Susanne Rostock’s inspiring biographical documentary, Sing Your Song, surveys the life and times of singer/actor/activist Harry Belafonte. A personal intimate look into his life as an entertainer and activist. Like you are reading his journals, he takes you through his life over the past 60 years. He has been an activist, a force in making things happen and no body really knows about it.