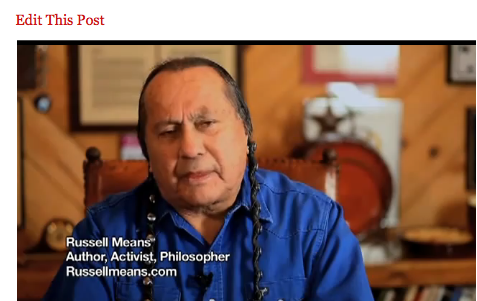 Russell Means on the state we’re in

The United States is one big reservation, and we are all in it. So says Russell Means, legendary actor, political activist and leader for the American Indian Movement. Means led the 1972 seizure of the Bureau of Indian Affairs headquarters in Washington, D.C., and in 1973 led a standoff at Wounded Knee, South Dakota, on the Pine Ridge Indian Reservation, a response to the massacre of at least 150 Lakotah men, women, and children by the U.S. Seventh Cavalry at a camp near Wounded Knee Creek.

American Indian Russell Means gives an eye-opening 90 minute interview in which he explains how American Indians and Americans in general are all imprisoned within one huge reservation.