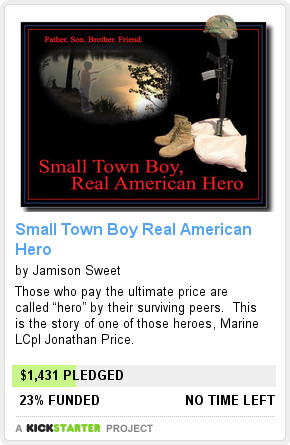 Message from the director: http://www.kickstarter.com/

Many men and women voluntarily risk life and limb in the United States military in time of war. Those who pay the ultimate price are called “hero” by their surviving peers. This is the story of one of those heroes, Lance Corporal Jonathan Kyle Price.

Staff Sergeant Jamison Sweet notified his family when Lance Corporal Jonathan Kyle Price was killed in Iraq. Kyle’s parents, John and Cheryl, did not disdain the bearer of bad tidings, but in time welcomed Jamison—Jay—into their family. And there he learned how young Kyle prepared as both an Eagle Scout and a member of the Young Marines to fulfill his lifelong dream to serve in the United States Marine Corps. And in that crucible the desire was forged to honor, not only the Marines Staff Sergeant Sweet buried, but all who serve their country and the families that sustain them, suffer their wounds with them, and grieve when they fall.

Small Town Boy, Real American Hero is one family’s story, told by those who walked with him on the same, or a similar, path. It is also one former Marine’s mission to honor those who bear the same risk, make the same sacrifice and define the word hero with their own blood in the sand.