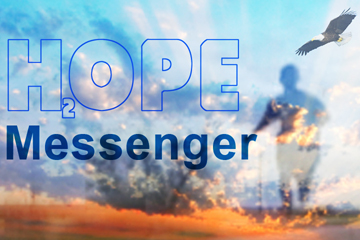 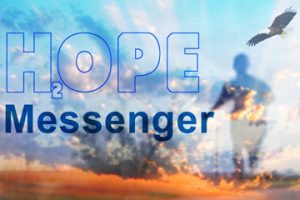 Running is a prayer.

The Hopi ran with water that they had collected from all over the world in a gourd, from Moenkopi to Mexico City and then to the pyramids of the Sun and Moon at Teotiwakan. They gave the water they had carried with them to the people and water was exchanged. That water was then taken down to Peru and then brought back up to Mexico. Making connections and receiving blessings from the people there.

The following year runners came from Mexico back up to Hopi with the water and also the feminine activating fire. The Hopi met them at the border and ran all the way back with them.
It rained when they crossed into Zuni.

There is part of the ongoing fulfillment of the prophecy of the connection of both the North and South American Indian tribes. It is a process of Coming Together. Coming Back To Center. It is all directions returning to a HEART CENTERED way of being.

This prophecy explains that when the power of the Eagle of the North connects in balance with the spiritual Earth centered Condor of the South, our Earth will then come into balance.

In March of 2006 The Hopi Indians of North America gathered water from all around the world and ran 2,000 miles to be part of a long awaited ceremony at Teotihuacan (http://www.nativeweb.org/pages/pyramids/teotihuacan.html). The Hopi had not been back to Teotihuacan in 500 years.

Here on the spring equinox they were welcomed by an intercontinental gathering of tribes and they performed the Eagle Dance for the first time in 500 years.

–More about the Eagle and Condor Prophecy

Through out our history in the story telling of our ancient people there is a line that is told from generation to generation without the tellings of old we could not survive as the indigenous people. There was a legend told, a story of the great bird, this today is known as the condor and the most  powerful of the native peoples telling, the Eagle. It was said in time there will be a bringing forth to all that is of this creation, of world the Condor will come from the South the Eagle will come from the North and it is said of the two – when they are brought to actual pairing this is now the beginning of what is to be a time of peace.

So in this profound statement of seeing the Condor from the South and the Eagle feather from the North and being bringing forth in time of such an auspicious occasion, a gathering such as this. We know now that this was destiny, this was told in the ancestry and now we have got the ability and the blessing to see the fruition. it is now our responsibility, to know that with this we have responsibility to unfold it in the most appropriate way.

shall come into beautiful manifestation.

One year later the tribes that welcomed the Hopi decided to do a return trip.
They gathered the 4 elements, the water the Hopi brought, the fire which was lit by a mayan elder, earth and air, these tribes ran the 2000 miles back to hopi land and not only brought the 4 element but also brought the much need rain. For the first time, ever the Hopi allowed for an outside group to dance in their sacred second mesa courtyard and allowed it to be recorded. This was a gift.

It is said that Montezuma’s treasure would reveal itself in 500 years. This treasure is the uncovering of the true rich culture of the Native American Indians.

WE ARE EDITING IT NOW.