The Fluoride Deception exposes the truth about water fluoridation.

“Fluoride. Dentists say that drinking it can protect your teeth against cavities. Cities and towns all across the world actually dump it into the water supply, hoping to indiscriminately medicate the population through their tap water faucets. 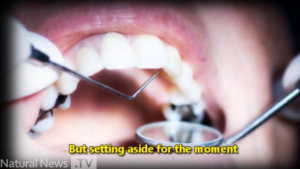 The official story on fluoride sounds wonderful: Drink the stuff, and you won’t get cavities, we’re told. It’s a nice story. But there’s another side to this story — the side you’re never told. And it starts with the astonishing but verifiable fact that nearly all the fluoride dripped into municipal water supplies isn’t naturally occurring fluoride at all.

In fact, it’s actually a combination of hexafluorosilicic acid and sodium silicofluoride.

These two chemical are considered highly toxic by the EPA. They’re actually classified as hazardous waste and when packaged for transportation, they must be labeled as poison and handled by workers wearing industrial safety gear.”